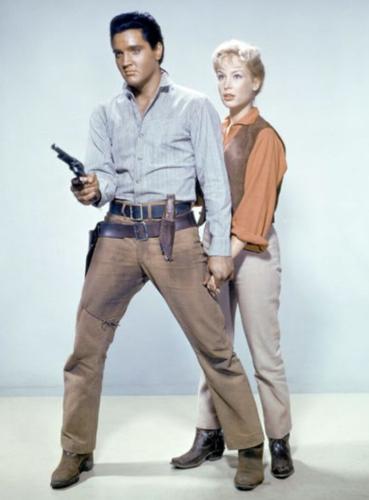 Barbara Eden co-starred with Elvis Presley in the 1960 western "Flaming Star." The "I Dream of Jeannie" star will share her memories of working with Elvis and stories about her career on Aug. 15 at Elvis Week. 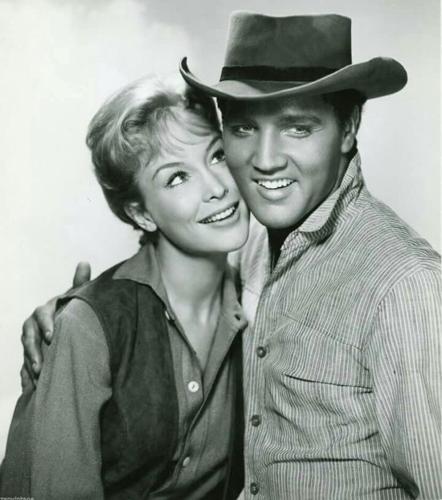 Barbara Eden spent a lot of time talking to Elvis between setups on location during "Flaming Star." 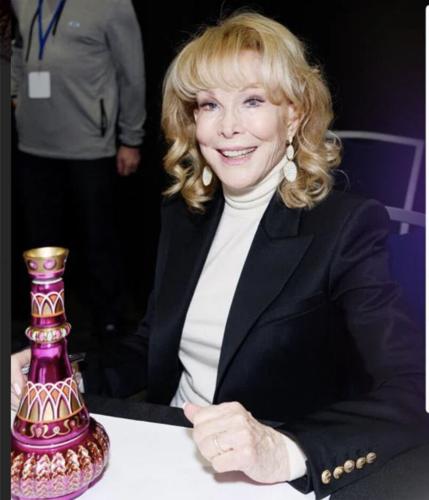 Barbara Eden will turn 91 on August 23. She will be making her first ever appearance at Elvis Week at Graceland. 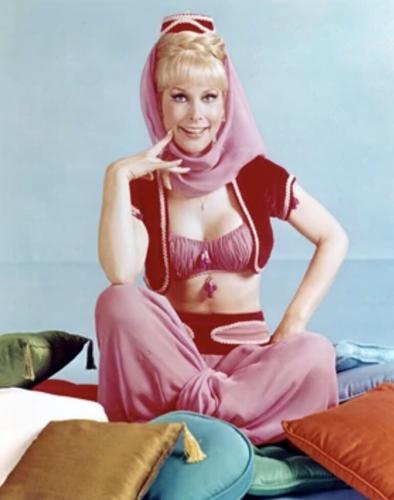 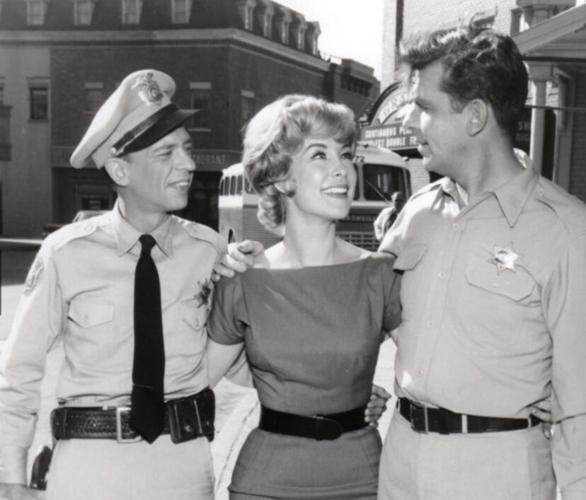 Eden receives a lot of fan mail from her 1962 appearance in the classic episode "The Manicurist" on the Andy Griffith Show.

Barbara Eden co-starred with Elvis Presley in the 1960 western "Flaming Star." The "I Dream of Jeannie" star will share her memories of working with Elvis and stories about her career on Aug. 15 at Elvis Week.

Barbara Eden spent a lot of time talking to Elvis between setups on location during "Flaming Star."

Barbara Eden will turn 91 on August 23. She will be making her first ever appearance at Elvis Week at Graceland.

Eden receives a lot of fan mail from her 1962 appearance in the classic episode "The Manicurist" on the Andy Griffith Show.

Barbara Eden was already an Elvis fan when she was cast to star  with him in the 1960 western “Flaming Star.”

The future “I Dream of Jeannie” star was rehearsing at a dance club in Hollywood when Elvis made his famous appearance on “The Ed Sullivan Show” in 1956. Eden said all of the girls stopped what they were doing and were mesmerized by the singer’s good looks and his hip swaying moves.

“We all went oooooo,” Eden said in a telephone interview. “He was so handsome.”

Eden will be a guest at “Elvis Week” on August 15 where she will share memories of making “Flaming Star” and stories about her career at the “Conversations on Elvis” panel discussion on the Graceland Soundstage.

Eden, who will turn 91 later this month, said she has visited Graceland before, but this is her first time at “Elvis Week.”

“I am looking forward to it,” Eden said. “I understand there are big changes at Graceland.”

“Flaming Star” was the second movie Elvis made after returning home from the Army. Eden was still in the early stages of her career, but had appeared on television on “The Johnny Carson Show” and other popular programs like “I Love Lucy,” “Perry Mason,” and “Gunsmoke,” as well as a few minor movie roles.

She said she was immediately impressed with how polite, humble, intelligent, and hard working Elvis was.

“It was a fabulous experience working with Elvis,” Eden said. “He was just the most sensitive, kind, and gentlemanly man. He had a great work ethic and really cared. And as huge a celebrity as he was, he didn’t put on airs about it. That really impressed me.”

Eden said Elvis would bring her a chair every time she came on the set, and that they spent a lot of time talking in between takes. Elvis’s father, Vernon, was with him during filming, along with a couple of his Memphis friends, and Eden said Elvis would sit around and play his guitar and sing.

“When you do a feature film, there is a lot of time between setups,” Eden said. “So we talked a lot.”

Eden said she was surprised when Elvis told her that he was a big fan of her husband, Michael Ansara, who starred as Cochise in the 1950s ABC series “Broken Arrow” and would later go on to co-star with Elvis in the 1965 musical comedy “Harum Scarum.”

Eden said Elvis asked her about her marriage and told her that he had a girl in Germany that he was thinking about marrying, but that she was young and he wasn’t sure she would be able to adjust to Hollywood.

The girl was Priscilla Beaulieu, who was 14 when she first met Elvis. They would get married seven years later in 1967 in Las Vegas.

Eden said Elvis also talked about his mother, Gladys, and his manager, Colonel Tom Parker, who would hang around the set. Eden said Parker smiled and waved to everybody like it was a circus and set up a table off to the side selling Elvis merchandise, which she found amusing.

While Parker has often been cast in an unflattering manner because of the excessive amount of money he took as manager and is accused of working Elvis too hard, Eden said Elvis credited Parker for making him a star.

“Flaming Star” is considered one of Elvis’s best movies, but didn’t do well at the box office. Paramount released “G.I. Blues” the month before which was full of songs and was a hit with audiences. Elvis found himself stuck in that same cookie-cutter formula for the rest of his movie career.

Eden said Elvis was a wonderful screen actor and could have gone on to greater roles if he be been allowed to appear in better movies.

“People wanted to hear him sing in some exotic locale surrounded by pretty women and kiss the girl in the end,” Eden said. “He worked very hard in “Flaming Star.” He had a very difficult part to play. He played a half breed. He didn’t get the girl. Other than the title song and a little scene in the kitchen with me, he didn’t sing. And he died. But he was so talented and so real in everything he did. I just loved him.”

Eden crossed paths with the singer again in Las Vegas in 1973 during his iconic run at the International Hotel showroom.

“I was at the MGM Grand doing and between shows Mike went down and saw Elvis,” Eden said. “He came back to me and said ‘Barbara, you have got to go down and see him’. I had another show to do and I am kind of strict on myself when I am working. I don’t go out. But I did and holy cow was that wonderful. He was just magnetic. He had his band on the stage, there were four guitar players and an orchestra and all these singers, and it was just throbbing with his wonderful music. There was no one like him.”

After “Flaming Star,” Eden’s career took off. She was signed by 20th Century Fox studios and appeared in “The Wonderful World of the Brothers Grimm” and “7 Faces of Dr. Lao” for director George Pal, and “Voyage to the Bottom of the Sea” and “Five Weeks in Balloon” for Irwin Allen.

“I had so much fun making those movies,” Eden said. “George Pal and Irwin Allen were wonderful to work with.”

Eden was also Pat Boone’s first movie screen kiss in “All Hands on Deck.” Boone will also be a guest at “Elvis Week” on the same panel as his former co-star.

“When it came time to shoot it, there was his wife and I think two or three kids, because it was the very first time he had kissed someone on screen. We had a good laugh.” Eden said. “He’s another wonderful man like Elvis, but in a different way. He’s a little more understated, but a super gentleman and wonderful to work with.”

Eden would go on to even greater fame on the small screen in “I Dream of Jeannie” which ran on NBC from 1965 to 1970. Eden said producer Sidney Sheldon had auditioned a number of Middle Eastern looking women and beauty queens for the part, but couldn’t find the right actress he was looking for to play Jeanie.

“I had seen the write-ups in the trade papers about “I Dream of Jeannie,” and they were testing these gorgeous women. They were all brunettes and they were all beauty contest winners,” Eden said. “I thought, well that’s not for me. That’s not who I am.”

Eden said Sheldon had seen her in the 1964 comedy-fantasy “The Brass Bottle,” a movie about a jeanie, and that she was recommended for the role by some comedy writers who knew her work.

“I had done a lot of comedy before I ever did Jeannie,” Eden said. “I started with Johnny Carson doing comedy sketches. So I received the script and my agent called and said ‘Barbara, what do you think?’ I said ‘wonderful.’ He wanted me to meet Sidney Sheldon. I said ‘are you sure they know what I look like?’ He said ‘oh yeah, they know.’ So I went to the Beverly Hills Hotel and had tea with Sidney Sheldon and that was that. I did the part.”

Eden said it warms her heart that “I Dream of Jeannie” is still popular with audiences 50 years later.

“I get mail about it from all over the world,” Eden said. “I am just so happy that it is still being shown. It makes me feel wonderfully good. I was having lunch here in LA the other day with my husband and another couple, and as I got up to leave, this man at the table next to ours said to me - he had an accent - ‘I want to tell you what an honor it was to sit next to you.’ I said ‘really?’ He said ‘yes.’ They were from Germany, and he said ‘you are known all over the place in Germany. They show all of your movies.’ I thought, wow. That was so nice to hear. No one expected that show to be as popular as it still is today.”

Eden is also fondly remembered by audiences for another famous television appearance on “The Andy Griffith Show” in 1962. She played a pretty manicurist who sets up shop in Floyd’s barber shop and becomes too popular with the men in Mayberry to the dismay of the jealous wives.

“Isn’t that amazing?” Eden said. “It was a one time deal. I loved Andy Griffith and Don Knotts. They were so talented and both were very real in everything they did. Those men were genius. It was a joy to work with them.”

In 1991, she reunited with her “I Dream of Jeannie” co-star Larry Hagman in five episodes of “Dallas” during the popular nighttime soap’s last season, playing a billionairess bent on getting revenge against J.R.

“It was wonderful working with him again,” Eden said. “We laughed a lot. In my very first scene on “Dallas,” I exit an elevator. I was in a bright pink suit. As the elevator doors opened and I walked out, Larry started laughing and said ‘Cut! I can’t do this.’ It was like I was coming out of the bottle with that pink suit. We laughed about it. It was great working with him.”

“I’ve heard wonderful things about it and the actor who plays him,” Eden said. “I’m a member of the (Motion Picture) Academy so I still do see the movies that come out, but I watch them at home because of COVID. And there is a lot going on in television today.”

When asked if she would appear again in front of the cameras again if she was offered a good role today, Eden responded,

“Oh sure. If they wanted an old lady.”

Looking back on her co-star, Eden said she can’t believe that it has been 45 years since Elvis’s passing.

“I mourned that sweet man,” Eden said. “It was heartbreaking when I heard about it. He loved acting. He loved his work. And I think in the end that killed him.”