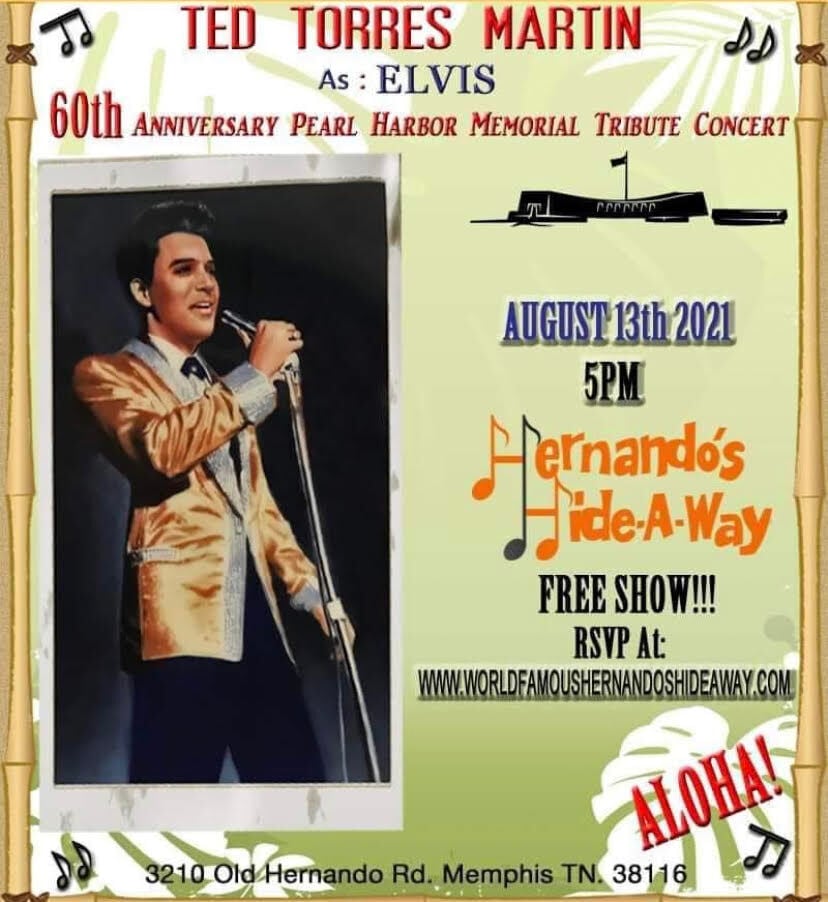 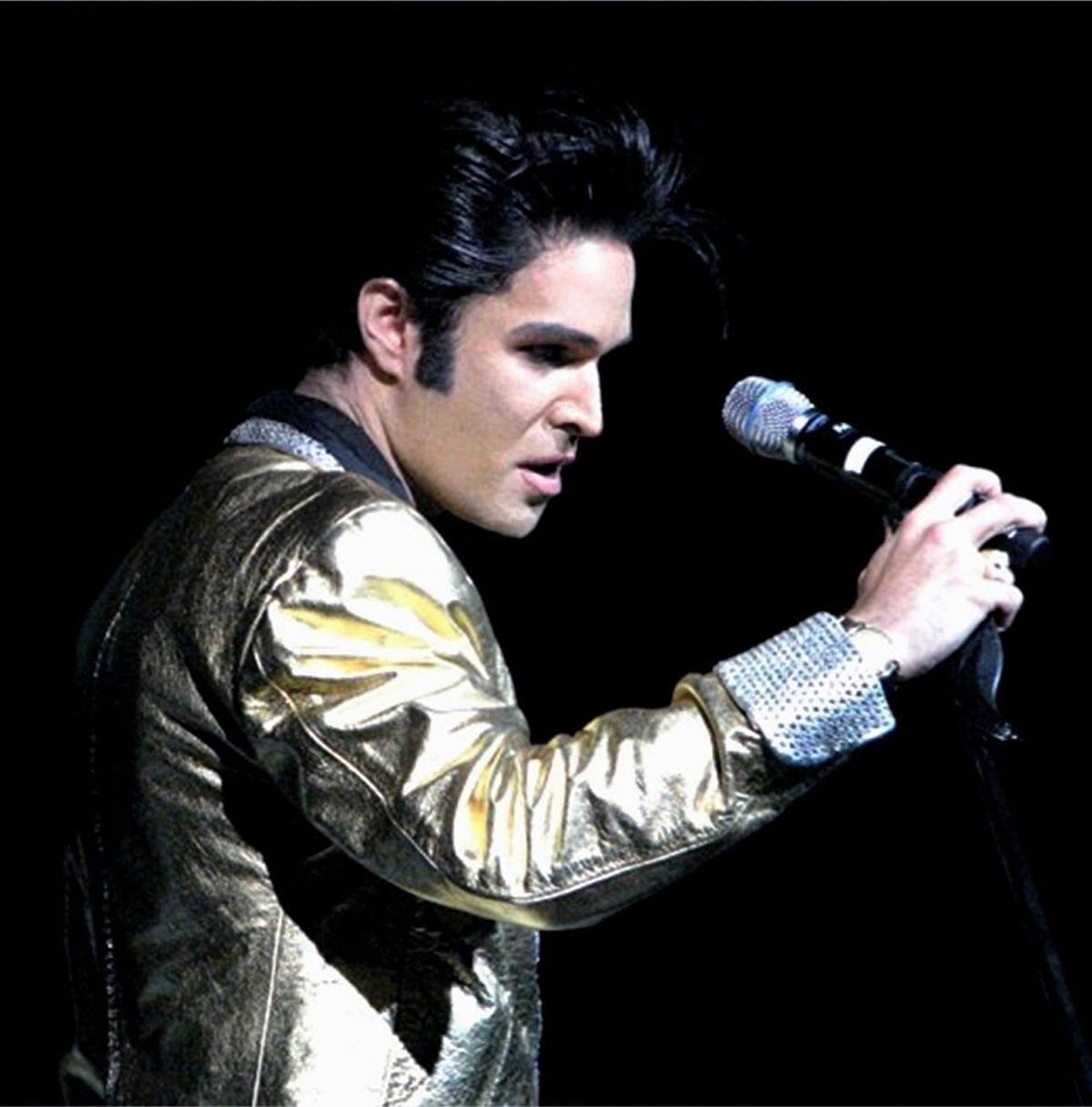 Ted Torres began performing shows as Elvis at age 12 after seeing the King of Rock 'n' Roll on television in "Jailhouse Rock."

Ted Torres began performing shows as Elvis at age 12 after seeing the King of Rock 'n' Roll on television in "Jailhouse Rock."

But one of his all-time favorite Elvis shows is a benefit the King of Rock ’n’ Roll played in Pearl Harbor, Hawaii.

On March 25, 1961, Elvis Presley staged a benefit show to raise money to help build the USS Arizona Memorial. The 26-year old singer was fresh out of the army himself when he read a newspaper article in 1960 about how the memorial’s fundraising had stalled and likely wouldn’t get built.

Wanting to do whatever he could to help honor the men who lost their lives during the attack on Pearl Harbor, Elvis and his manager, Col. Tom Parker, arranged to play a show to help jumpstart the fundraising efforts. More than 4,000 fans attended the show which was held at Bloch Arena. The benefit raised more than $54,000 for the memorial, and the resulting publicity helped bring national attention to the cause and was enough to raise the full $500,000 that was needed.

“I saw that the theme from this year’s Elvis Week was Hawaii,” Torres Martin said. “So I wanted to bring a little Hawaii to Memphis and this kind of fit. It has always been one of my favorite shows. It is one of the last shows that he did in the sixties before he quit performing in front of an audience. He wouldn’t go live again until 1969 after the 1968 Comeback Special.”

And speaking of the gold lame jacket, Torres Martin said he almost left it behind.

“I left it at home and when I got in my Uber, they had to take me back home to get it,” Torres Martin said. “It wouldn’t have been a show without it.”

Torres Martin has been performing shows as Elvis since he was about 12 years old. It’s a career that has taken him all over the world and rewarded him with multiple accolades, including “Best Elvis Vocals” in 2011 at the Las Vegas Hilton’s “Heart of the King,” and 2016 “Images of the King” World Champion.

Torres Martin, who comes from a musical family - both parents worked in the music industry -  said he became a fan of Elvis at around age 11 one night while watching television.

“My cousin was supposed to take me out, but he was probably chasing girls and didn’t want to hang out with his little cousin,” Martin Torres said. “So I was stuck home watching TV. I started flipping through channels and saw this guy who looked really cool. He had the coolest hair. But it was an old movie and I was like ‘I don’t want to watch an old movie.’ But it kept drawing me back in. That movie was Jailhouse Rock.”

After that, Torres Martin said he was hooked. He started attending Elvis conventions when he was 12 with his father, singing at open mic events. It was at those conventions that he met Gordon Stoker, a member of The Jordanaires, the band who sang backup vocals for Elvis, and D.J. Fontana, Elvis’s drummer, who encouraged him to pursue a career as an Elvis Tribute Artist.

“I was going for a songwriter/musician career, which I still do,” Torres Martin said. “But they started telling me that I had a great talent for this, and had a part in pushing me in that direction. So I took their advice. And I’m glad I did.”

Torres Martin said Elvis Week is always a special time of year for him because he enjoys seeing Elvis fans and performing with other ETAs.

“For me, it never gets old,” Torres Martin said. “I love being here. I’ve been coming to Memphis since I was about 13 years old. It’s very special to me. I feel a closeness to this city and, of course, all of the other Elvis performers. It’s nice to see everybody that I haven’t seen in a long time. That’s the great thing about Elvis. He really brings people together.”

He’s especially excited at the chance to play at Hernando’s Hideaway, a place rich with its own music history. Built in 1891 as a dry goods store, Hernando’s became a popular honky tonk in the 1940s, and over the next 60 years hosted stars like Elvis, B.B. King, and Jerry Lee Lewis, who played there so often that he referred to it as his “office.”

Texas honky tonk legend Dale Watson bought the building and reopened it with his wife, Celine Lee, in 2019, where it is once again a top destination for some of the hottest music acts passing through Memphis.

“I’m so excited,” Torres Martin said. “I’ve heard so much about it. I think it is fantastic that Dale and Celine bought it. I’ve been looking at the schedule of all the people that they have  brought here to play and they are just rocking it. I am really looking forward to playing there.”