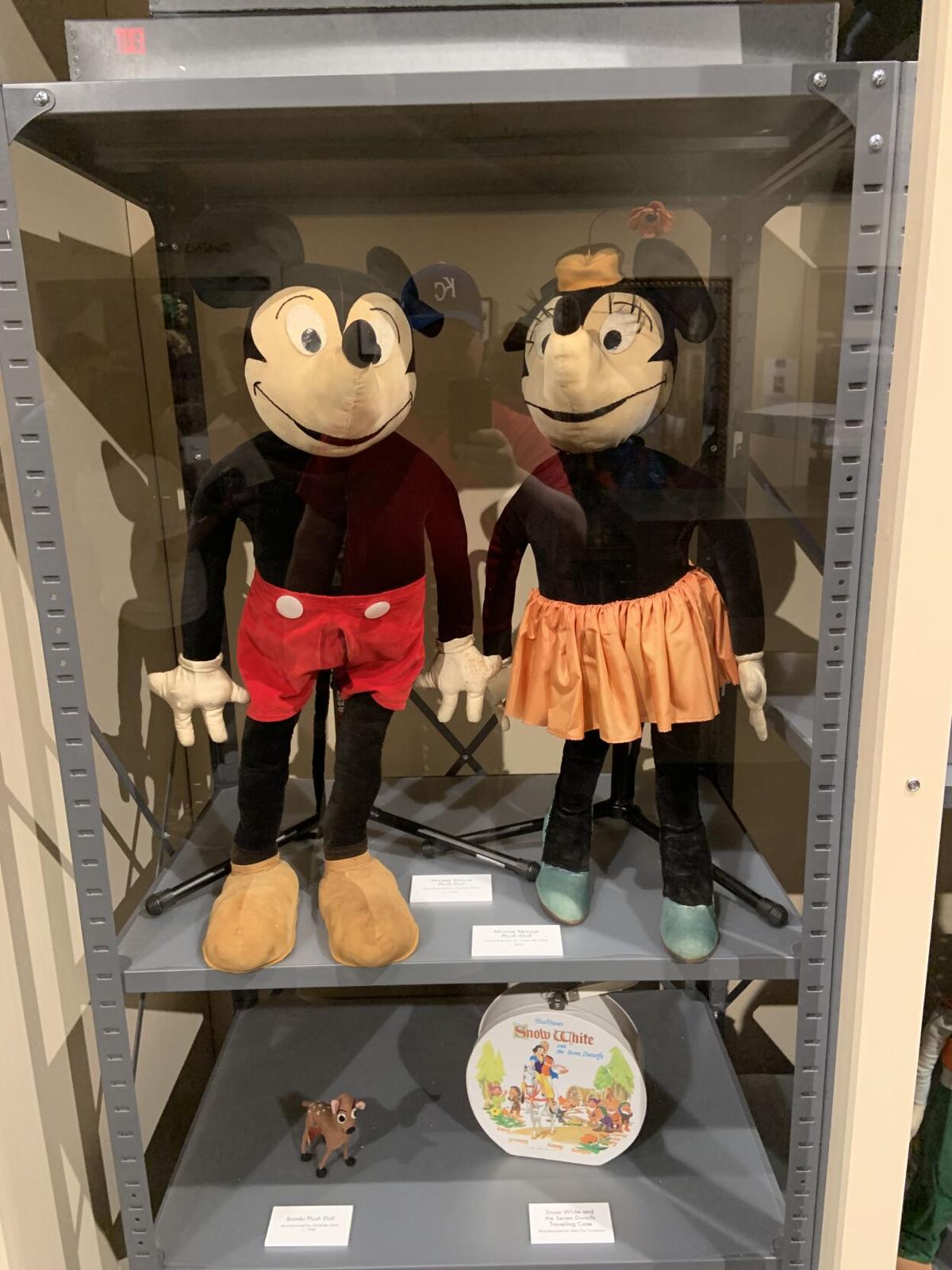 Mickey and Minnie Mouse plush dolls from the 1930s are just some of the many artifacts on display in the "Inside the Walt Disney Archives" exhibit at Graceland. 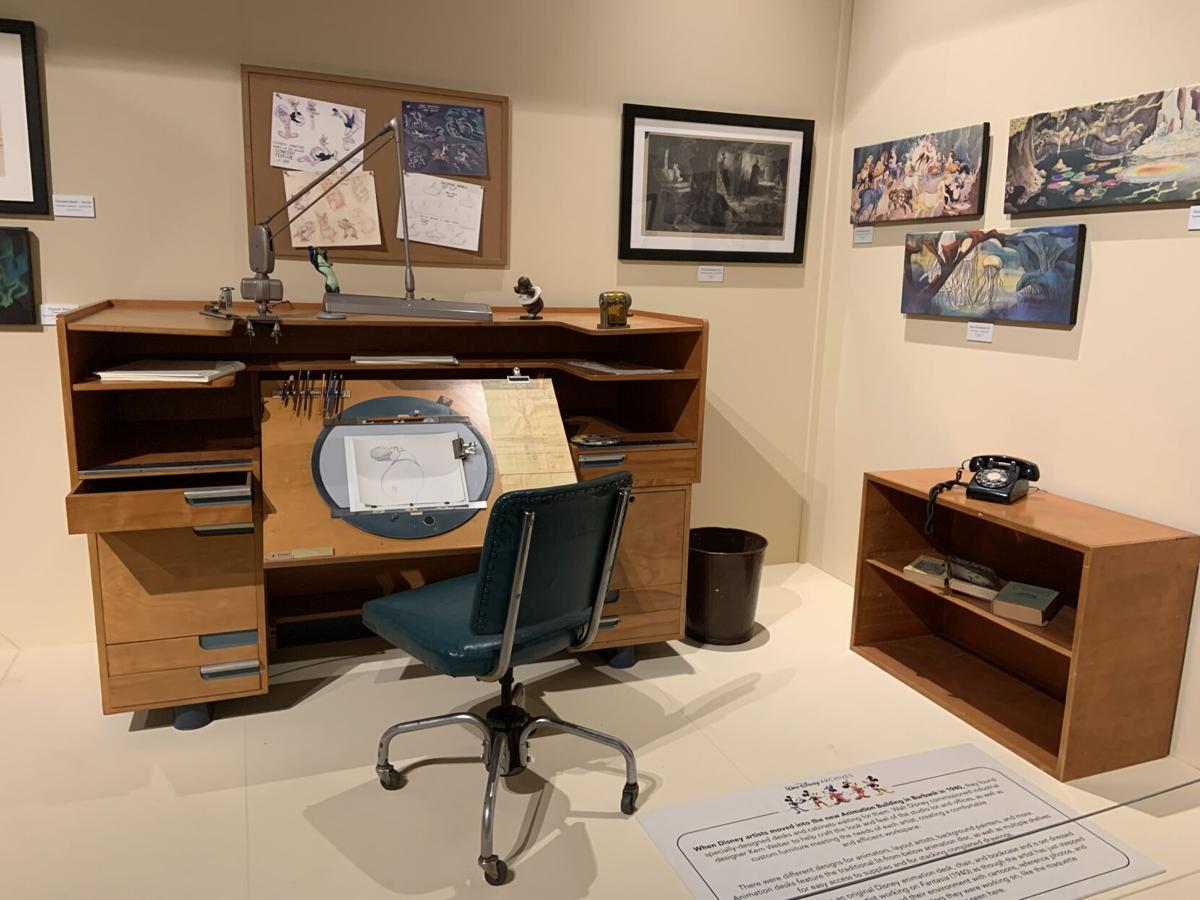 An original illustrator desk from the Walt Disney Studio. 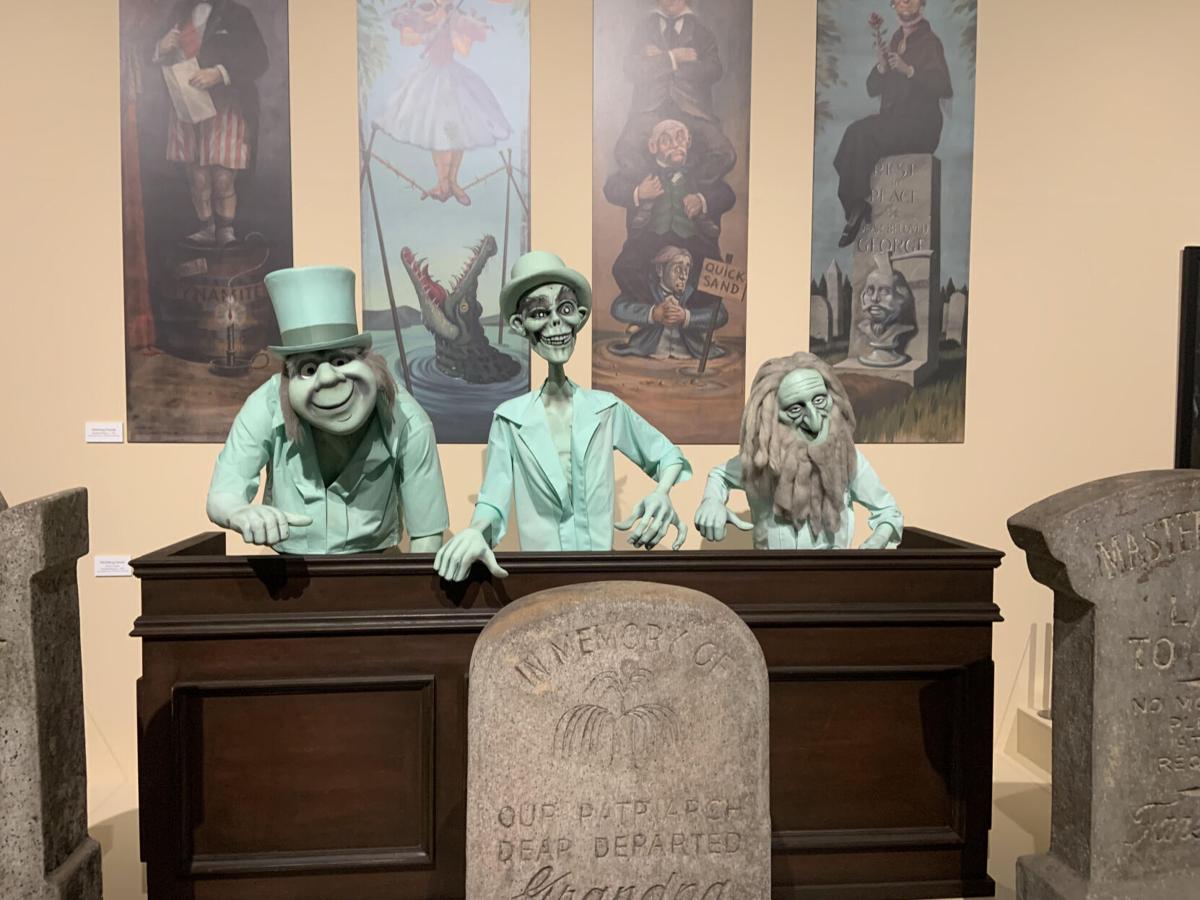 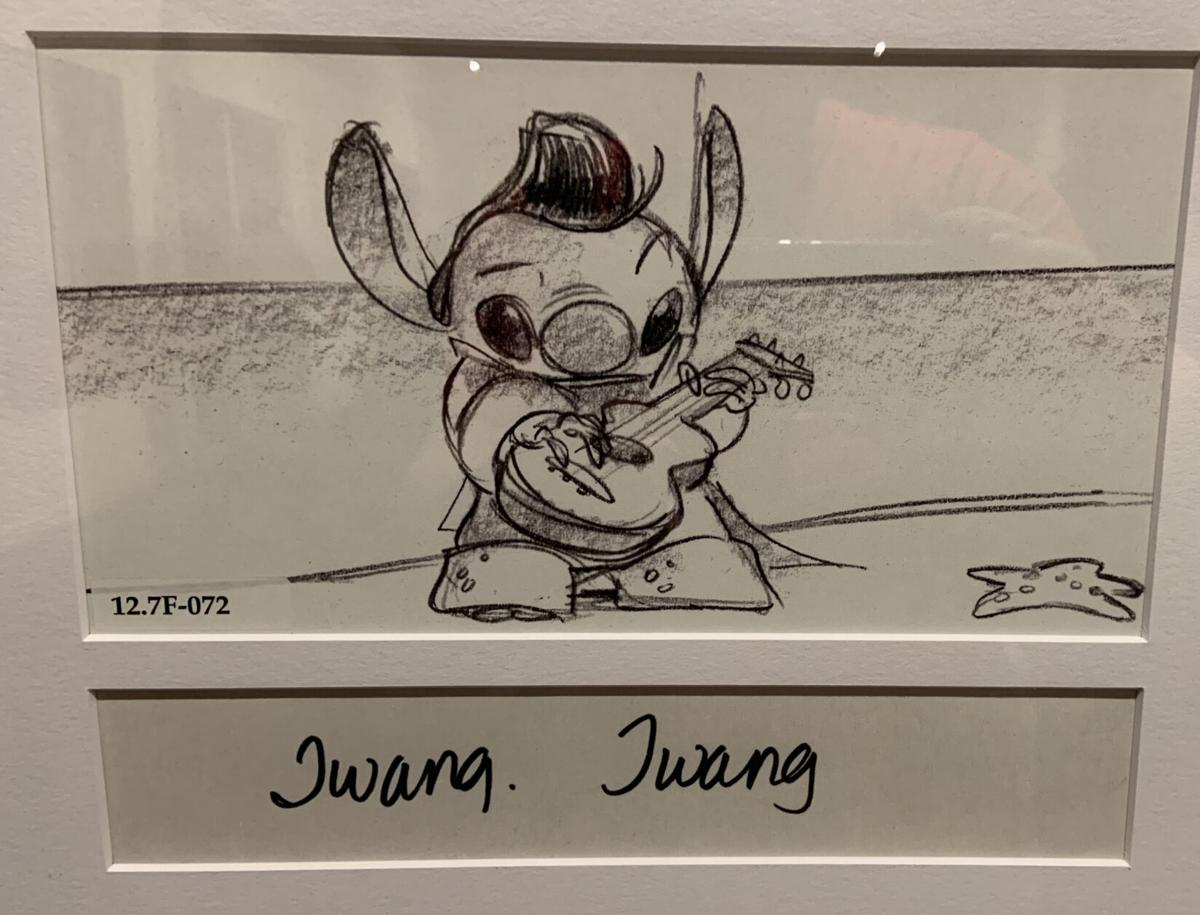 An original sketch of Stitch dressed as Elvis from "Lilo & Stitch." 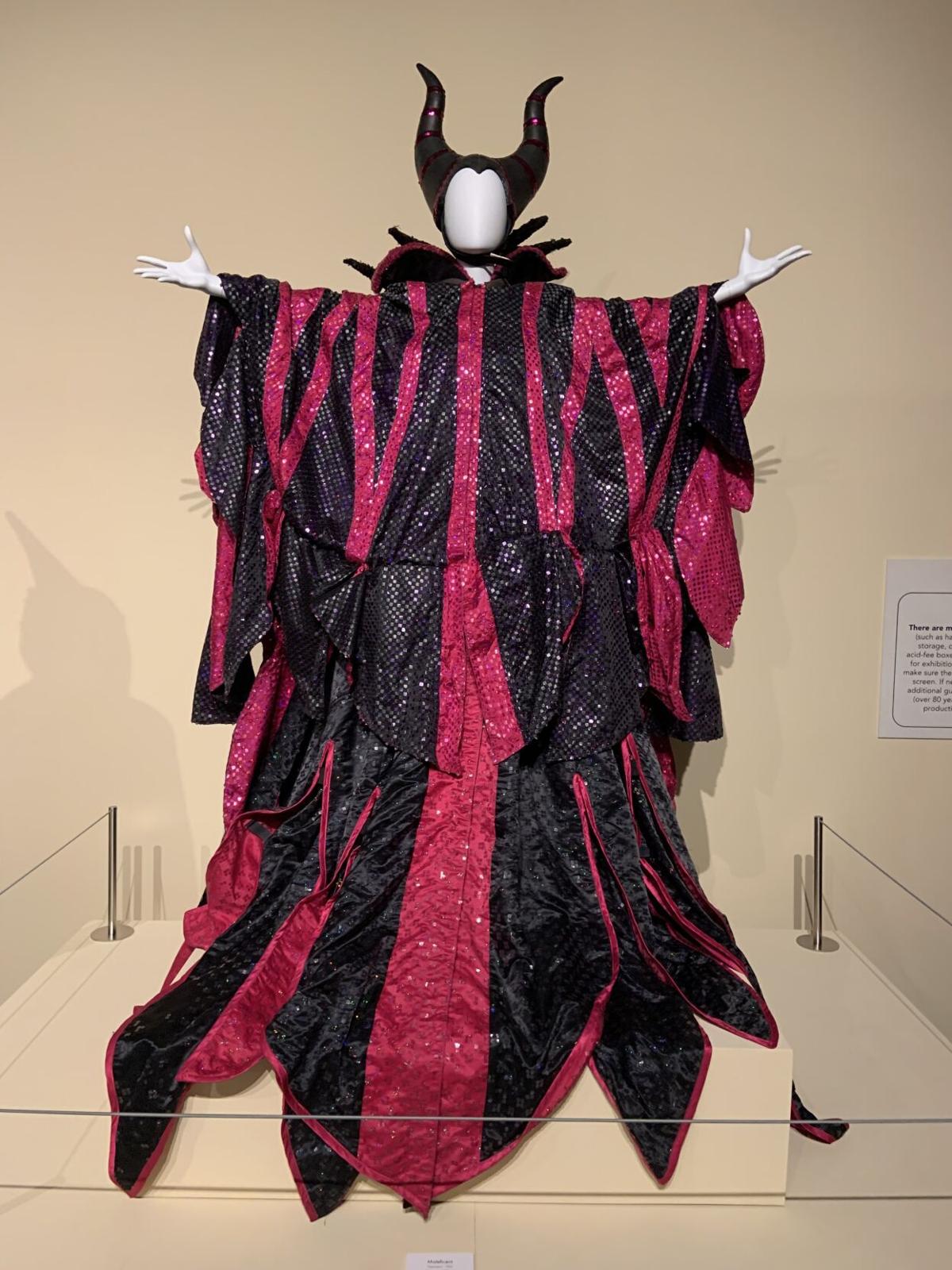 The costume from Maleficent, 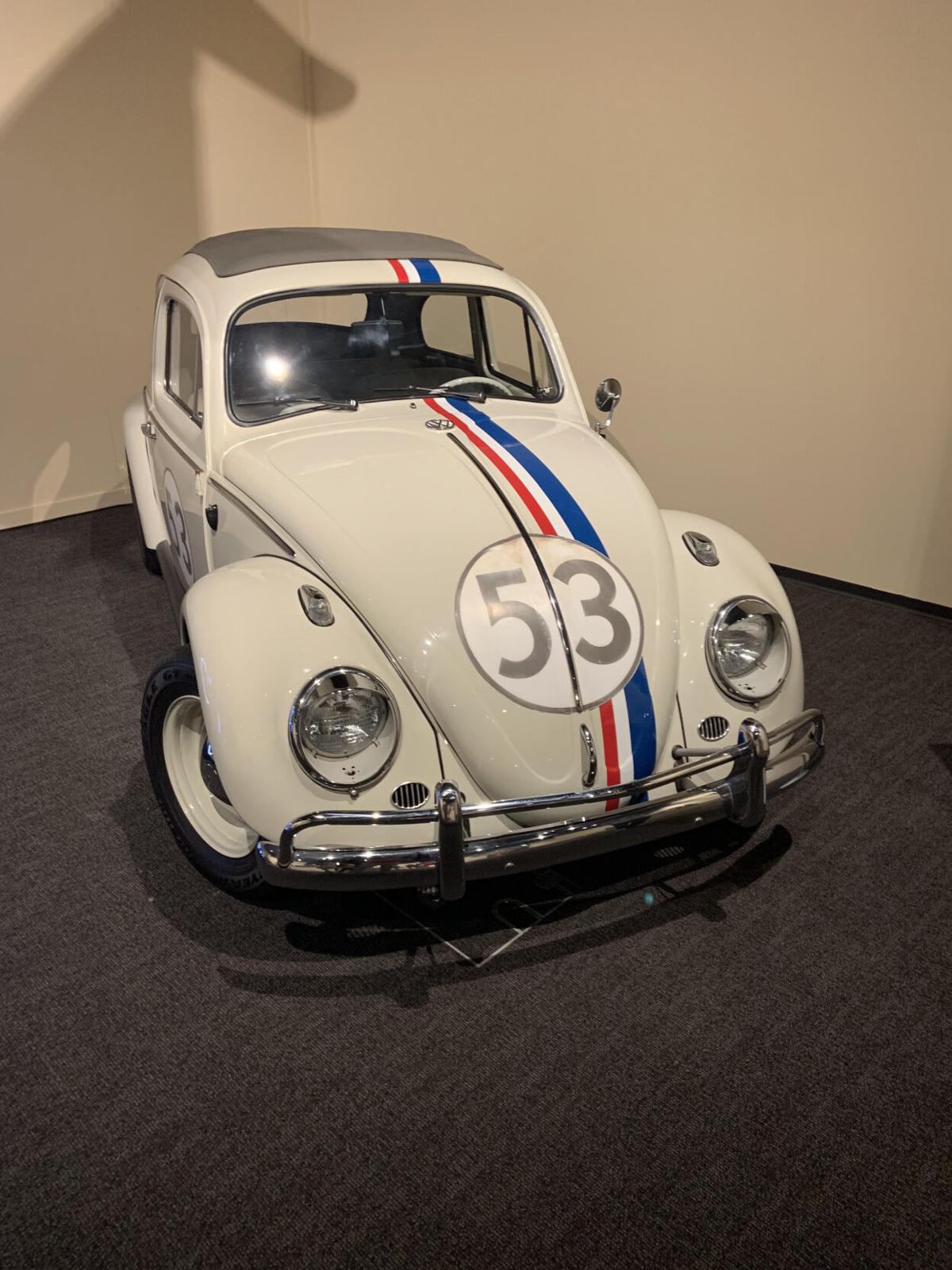 Herbie from the Disney live action movie "The Love Bug." 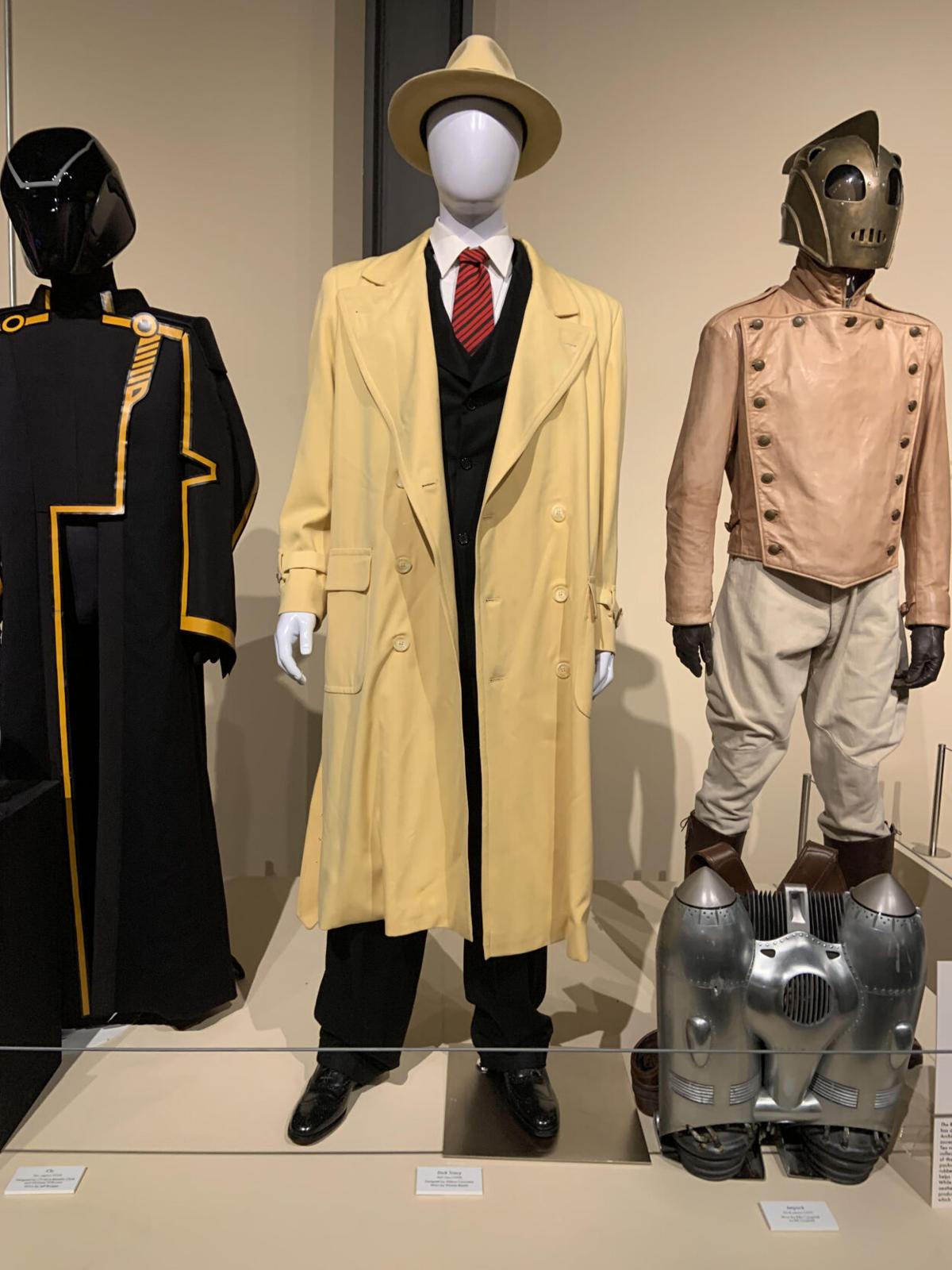 Movie costumes from "Tron: Legacy," "Dick Tracy," and "The Rocketeer." 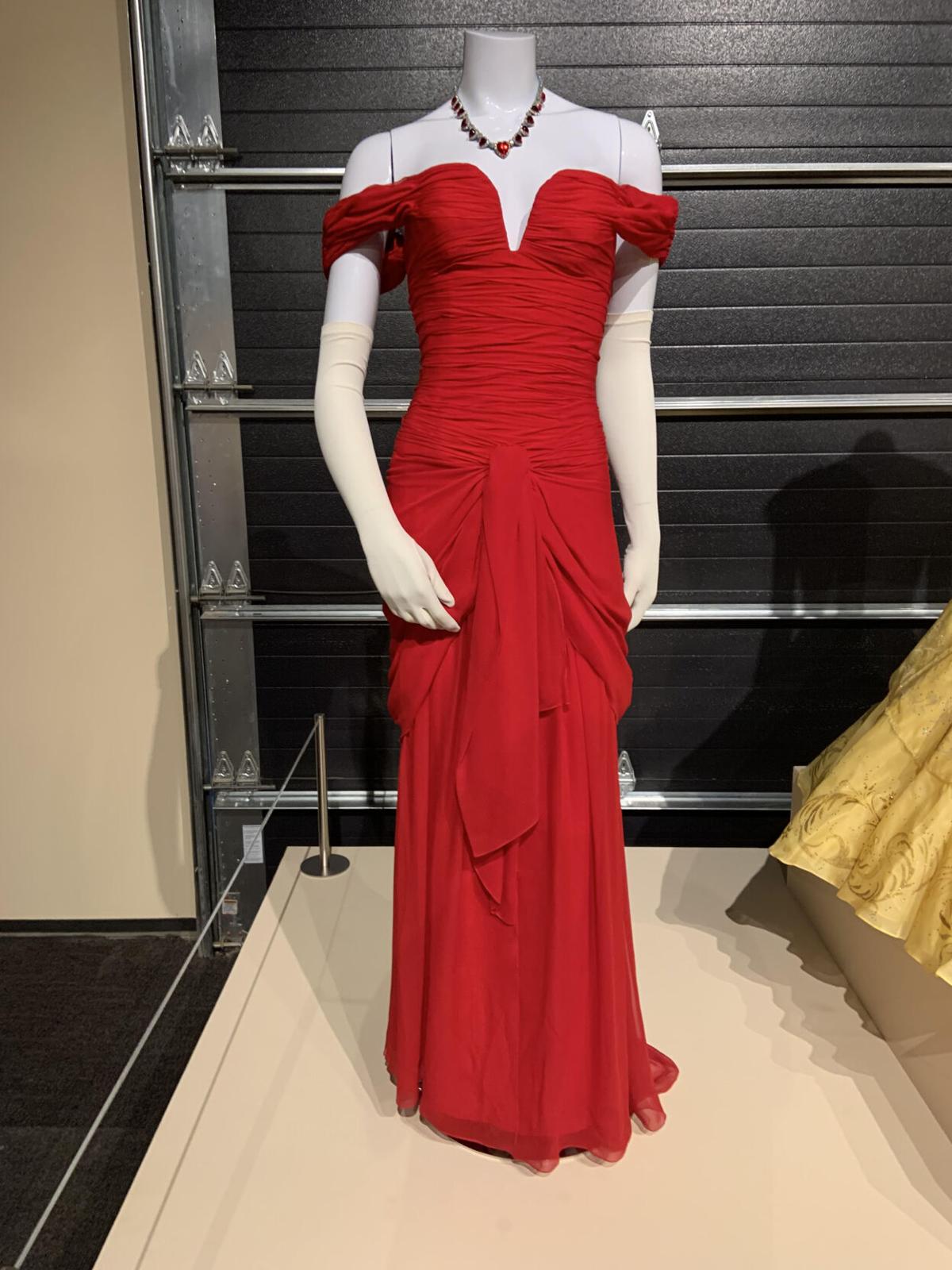 The iconic dress worn by Julia Roberts in the movie "Pretty Woman." 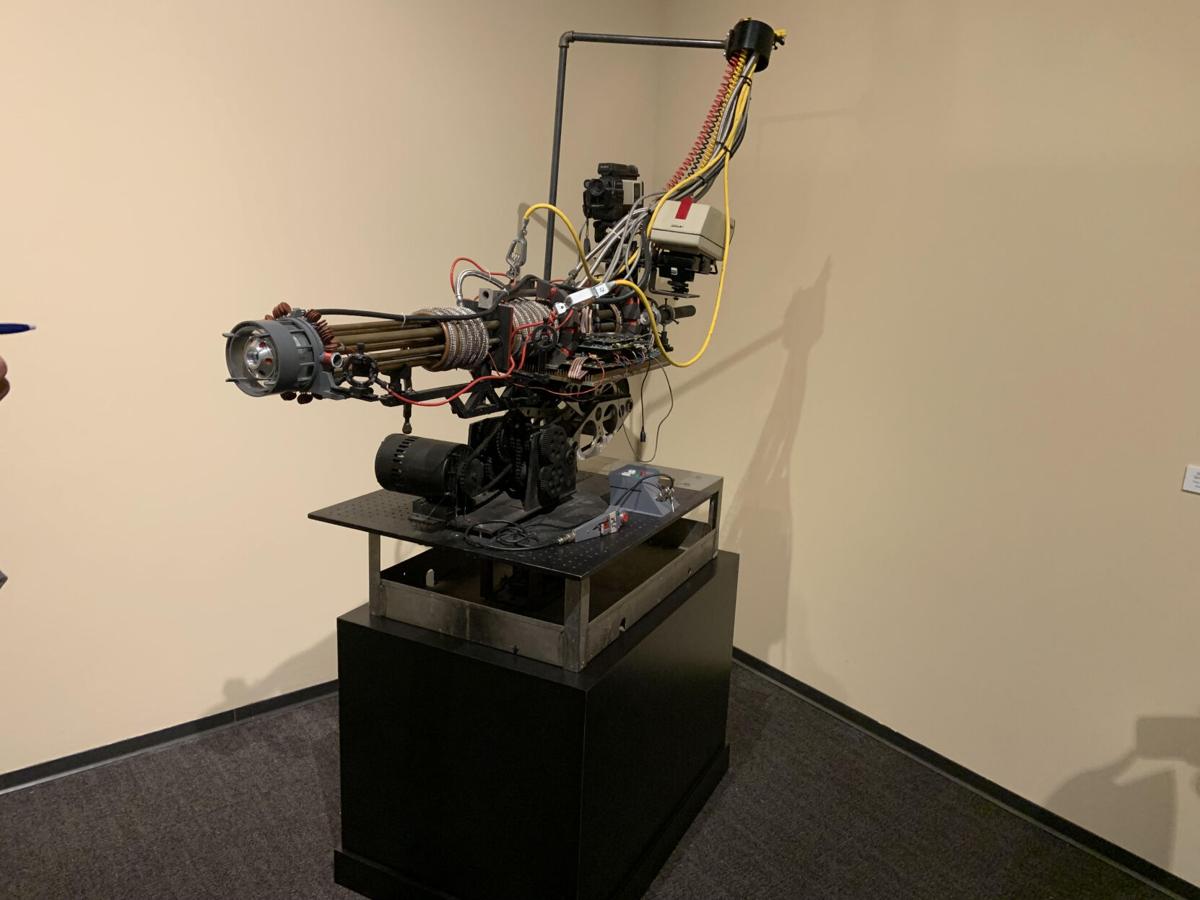 The Electromagnetic Shrinking Machine from "Honey, I Shrunk the Kids." 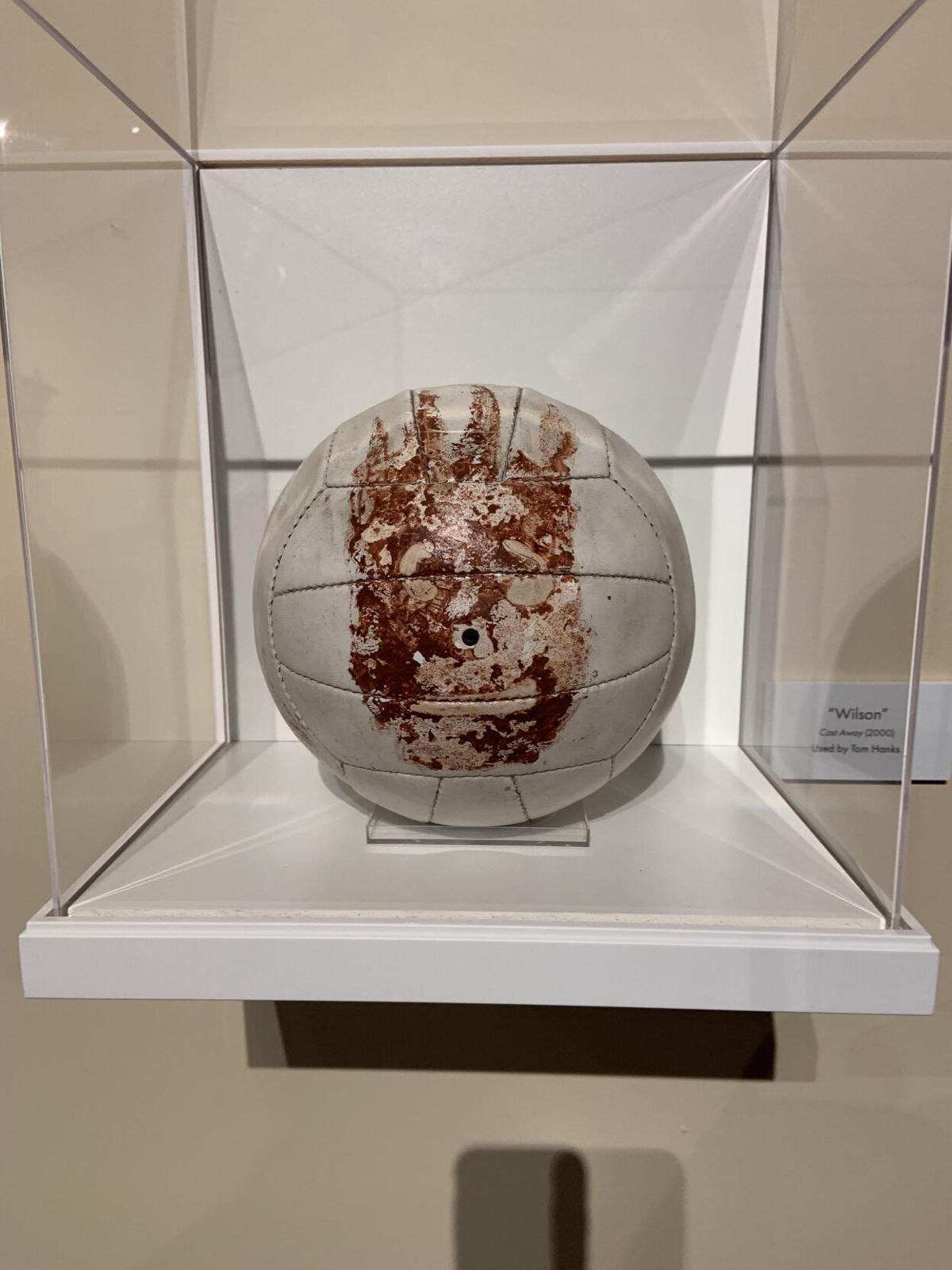 Wilson the volleyball from the Tom Hanks movie "Cast Away."

Mickey and Minnie Mouse plush dolls from the 1930s are just some of the many artifacts on display in the "Inside the Walt Disney Archives" exhibit at Graceland.

An original illustrator desk from the Walt Disney Studio.

An original sketch of Stitch dressed as Elvis from "Lilo & Stitch."

The costume from Maleficent,

Herbie from the Disney live action movie "The Love Bug."

Movie costumes from "Tron: Legacy," "Dick Tracy," and "The Rocketeer."

The iconic dress worn by Julia Roberts in the movie "Pretty Woman."

The Electromagnetic Shrinking Machine from "Honey, I Shrunk the Kids."

Wilson the volleyball from the Tom Hanks movie "Cast Away."

Elvis Presley and Walt Disney at first glance sound like an odd pairing and Graceland an unusual place to host a Disney exhibit.

Although both are icons of American pop culture, most fans don’t associate the King of Rock ’n’ Roll with the creator of Mickey Mouse and the Magic Kingdom.

But to Graceland archivist Angie Marchese, it’s a simple game of six degrees of separation to see where the two icons intersect.

“The one question I get asked the most is, why Disney and Elvis?” Marchese said. “With the exception of “Lilo & Stitch,” there is no direct tie. It’s not like Elvis met Walt or they were good buddies. And there is no Elvis going to Disneyland. But there are so many six degrees of separation.”

For example, the Dean Martin and Jerry Lewis movie “Hollywood or Bust” features a shot of the marquee sign at the New Frontier Hotel and Casino where Elvis was appearing in 1956. Director Frank Tashlin was married to Mary Costa, who voiced Princess Aurora in  the 1959 Disney animated movie “Sleeping Beauty.”

Actor Dean Jones, who appeared with Elvis in “Jailhouse Rock, went on to star in the popular Disney live action films “The Shaggy D.A.” and “The Love Bug.”

Angela Lansbury, who co-starred with Elvis in “Blue Hawaii” in 1961, appeared in Disney’s “Bedknobs and Broomsticks” and voiced Mrs. Potts in the much beloved animated feature “Beauty and the Beast.”

And with Disney’s recent acquisition of 20th Century Fox, three of Elvis’s movies, including his first one, “Love Me Tender,” are now a part of the Disney Archives.

“So there are lots of six degrees of separation here,” Marchese said,

The exhibition showcases more than 450 objects, including original artwork, costumes, and props, which give visitors a rare behind-the-scenes look into the studio’s vast archives collection, and Walt Disney himself.

Becky Cline, director of the Walt Disney Archives, said this is only the second time that they have taken this on the road anywhere in the U.S. The exhibit debuted at the D3 Expo Japan in 2018 at Matsuya department store in Tokyo’s Ginza, and was most recently at the Bowers Museum in Santa Ana, California.

“When we decided to build it to travel, we reached out to the museum  industry to see if there would be interest,” Cline said. “One of the first groups to reach out to us was Graceland.”

Cline said they were excited to come to Memphis and were impressed with the space and the professionalism of the archives team at Graceland. The Graceland Exhibition Center has 10,000 square feet of display space.

“We have really enjoyed working with them,” Cline said. “We were very impressed. We got to walk through their exhibition center yesterday and it is amazing. The original exhibit was in a ballroom. I think this configuration in Memphis is even better. It is a little closer to the feeling of being inside the real archives.”

“This is an exact replication of that space,” Vargo said. “It’s pretty incredible. We are so excited to bring it to the fans so they get to experience it firsthand.”

Vargo said visitors of all ages should find something for everyone to like, whether it’s the three hitch-hiking ghosts from “The Haunted Mansion,” “Herbie the love bug,” or props from “Pirates of the Carribbean.”

“I think they will be enchanted when they leave,” Vargo said. “It just brings back memories of a movie you may have watched or an attraction you may have ridden on.”

His favorite piece is the purple costume from “Maleficent.”

“I’m partial to Maleficent because it debuted in 1992, which was the year I started at Disneyland,” Vargo said. “I think it is fantastic. It is very special to me.”

For Cline, it’s the carpetbag from “Mary Poppins,” the first Disney movie she ever saw.

“I get very excited about anything in the collection related to Mary Poppins,” Cline said. “As I child, I loved that movie so much. I was four years old when it came out. I think my parents took me back three or four times because I begged and begged and cried. And then they bought me the soundtrack album.”

She’s hoping to convince Marchese to include Stich in the Icons: The Influence of Elvis Presley display currently on display at Graceland. The exhibit includes costumes from more than 30 music artists and entertainers who have been influenced by Elvis. Stitch, an extraterrestrial who is adopted as a pet by a lonely Hawaiian girl, dresses in an Elvis style jumpsuit and sings along to “You’re the Devil in Disguise.”

“They have that whole hall of outfits from people who have done Elvis tributes,” Cline said. “I’m going to see if Angie will put Stitch in there because he wears an Elvis suit.”

Elvis Presley Enterprises CEO Jack Soden said they are always looking for something unique to bring to the Graceland Exhibition Center, and credited Marchese and her team for coming up with the idea to pair Elvis with Walt Disney.

“The Disney Archives was a no-brainer,” Soden said. “These are two of the most iconic names in pop culture. Anything you can do in partnership with Disney, you know it has got to be good.”

Soden grew up watching “The Mickey Mouse Club” and visited Disneyland with his parents back in the 1960s.

“Yes, I’m old enough to remember ‘Why? Because we like you?’” Soden said, mimicking the famous line from the closing song. “We had a place that we went to almost every summer in San Diego - Coronado. So it was only a short trip up the coast. We went a couple of times way back in the 1960s.”

Soden said he was “blown away” when he saw the final exhibit completed, but was particularly drawn to an early sketch of Disneyland and Walt’s vision.

“It’s 45 acres,” Soden said. “This piece that we are on now is 77 acres. So I loved the Disney story right from the beginning. Everyone thought Walt was crazy. He borrowed all the money he could and built it out in the middle of nowhere in an orange grove. It was like so many truly amazing entrepreneurial stories. He literally changed the world. There were amusement parks, but the term theme park was literally born with Disney.”

Marchese said there is already a lot of crossover between Disney and Elvis fans.

“If you go on the ride (Guardians of the Galaxy: Mission Breakout) at Disneyland, one of the songs they play when you are on the ride is “Burning Love,” Marchese said. “So kids are exposed to Elvis every day at Disneyland. And then of course Stich - even though he is 20 years old - he is still one of the most beloved characters. So Disney is exposing new audiences to Elvis. And bringing people to this exhibit will create new Elvis fans.”

Although as an archivist Marchese is already used to handling really cool Elvis related artifacts, she said working with Disney Archives and seeing the Disney treasures up close was a different kind of cool.

“You can’t get any cooler than this,” Marchese said. “Elvis is Elvis and Disney is Disney. But there is no bigger brand than Disney that has had more of a major influence on pop culture.”

Marchese said she has no doubt that “Inside the Walt Disney Archives” is going to bring back memories for a lot of people - and create new memories for families to share.

And what would the King of Rock ’n’ Roll think about the exhibit?

“I think Elvis would have loved this,” Marchese said. “Elvis was just such a big kid.”