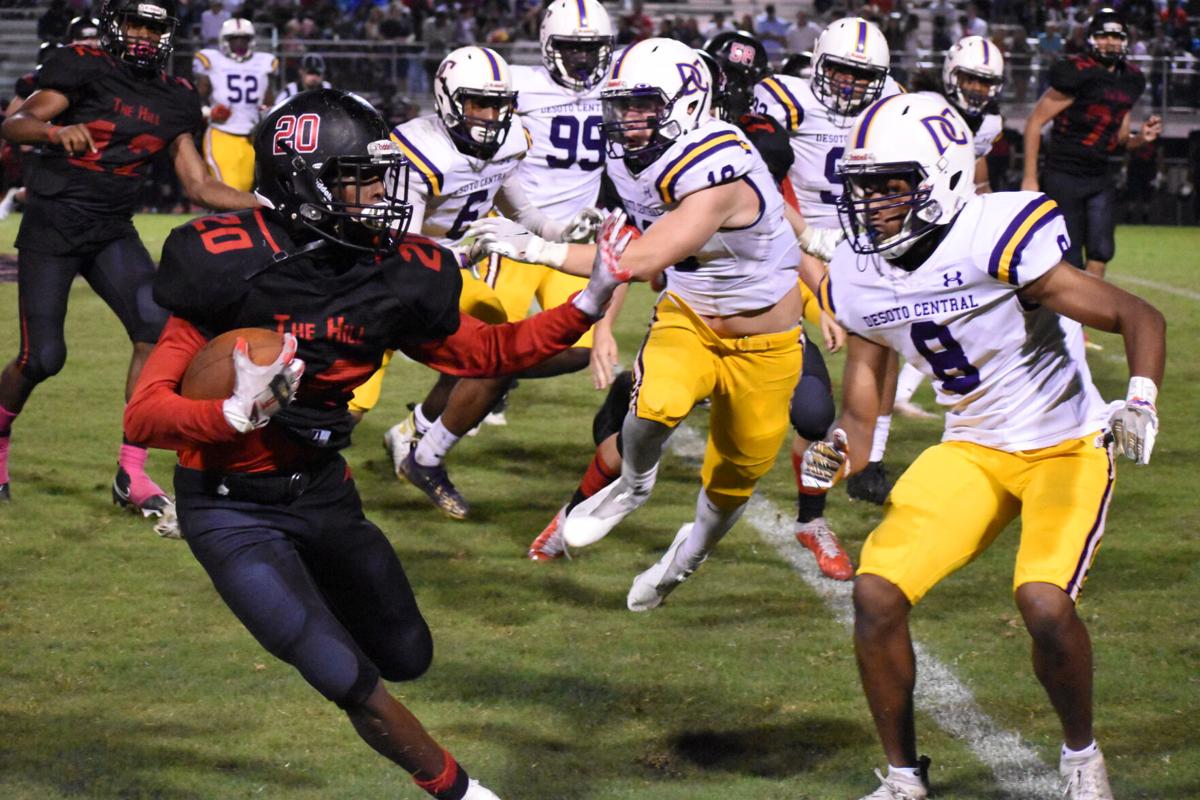 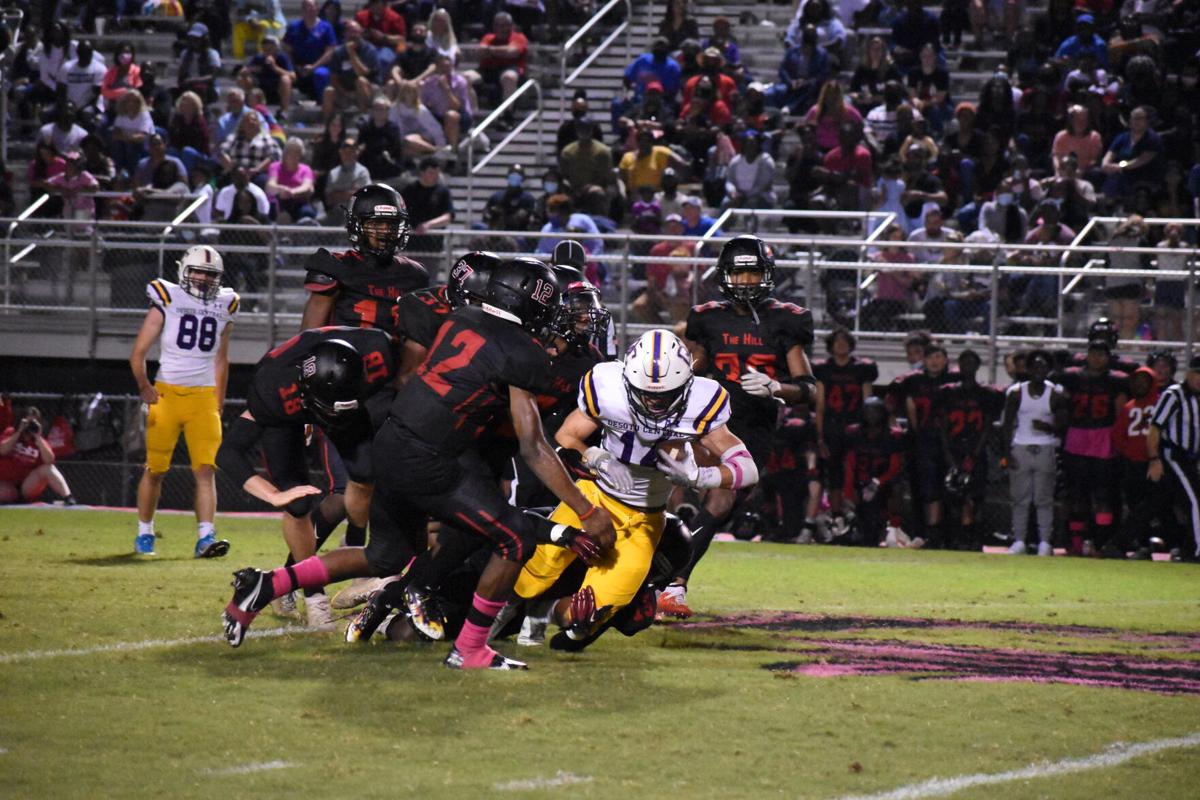 Jaguars’ senior linebacker Ryan Musselwhite gets taken down by four members of the Mustangs’ defense. Musselwhite scored two touchdowns during the game.

Jaguars’ senior linebacker Ryan Musselwhite gets taken down by four members of the Mustangs’ defense. Musselwhite scored two touchdowns during the game.

DeSoto Central is 3-0 in district play after taking down the Center Hill Mustangs, 31-15, Friday night at the Mustangs’ homecoming game.

Coming off a win secured by a strong running game, the Mustangs tried to rush another win with minimal passing but the Jaguars’ defense proved to be overpowering.

“It feels good when you beat a team 31-15, but you’re not satisfied,” Jaguars’ Head Coach Shelby Ford said. “We scored 31 points and we weren’t happy with our performance, but that’s the standard we’re trying to set.”

The Jaguars’ offense took the field first but went three and out and gave it over to the Mustangs at the 47-yard line. From there, Center Hill took the ball down to the 19-yard line but the Jaguars’ defense refused to let them any farther.

On fourth down, the Mustangs risked it and tried again to break through, but turned the ball over on downs instead.

“We probably should have kicked a field goal, but if it’s close enough, I feel like we’ve got a shot and we’re going to usually go for it in those situations,” Mustangs’ Head Coach Alan Peacock said.

The Mustangs stopped the Jaguars for the second drive in a row after the turnover and forced them to punt and let the Mustang action resume. Center Hill mixed it up and let their senior quarterback Marq Holmes shine on the drive.

Holmes saw sophomore JD Washington in the end zone and zeroed in on him for the first touchdown of the game to make it 7-0.

“Offensively, we didn’t capitalize on some things,” Peacock said. “You get them stopped the first two drives, we have to get more than one touchdown out of that.”

The following kick return went well for the Jaguars and they started from a good field position near the 50-yard line. They moved it up into the Mustangs’ red zone and then senior Marquis Fields punched through the Mustangs’ line to put the Jaguars on the board. DeSoto Central trailed by one point after the touchdown after a failed PAT attempt and ended the first quarter down 7-6.

DeSoto Central looked to repeat the drive on their next possession and moved the ball back into the Mustangs’ red zone with a long pass to senior Blake Holley. The Mustangs’ defense stepped up and made stop after stop and the Jaguars could not break through.

Not wanting to waste the drive, the Jaguars attempted a field goal. The Mustangs blocked the kick, but also roughed the kicker, giving the Jaguars an automatic first down and a second chance at a touchdown.

Center Hill couldn’t stop the Jaguars the second time around. Junior quarterback Andrew Moore lost the defenders and scrambled into the end zone. The Jaguars went for a two-point conversion but it was no good and left the score at 12-7.

Moore threw an interception on a pass intended for senior Ryan Musselwhite, but a Mustang foul instead advanced the Jaguars into the red zone and again gave them another shot at a touchdown.

This play, like the last second chance, was not going to waste. Musselwhite powered through the defense to carry the ball 9 yards into the end zone and move the score to 18-7 to close out the half. The Jaguars attempted a two-point conversion but weren’t successful.

In the third quarter, the Mustangs fumbled on their first possession and was recovered by the Jaguars. Musselwhite picked up another touchdown on the night with a rushing play to make it 25-7.

On their next possession, the Mustangs went back to their tried and true running game and inched forward play after play until they got to the Jaguars’ 5-yard line. At fourth and goal, Holmes ran it in for the team’s second touchdown of the night to put the score at 25-13. A successful two-point conversion rushing play by Holmes pushed it up to 25-15 for the final points of the quarter.

The Jaguars were forced into punting after getting the ball back and sent it to the Mustangs in a tricky spot. The Mustangs went three and out from their own 5-yard line and the Jaguars got back possession already in the red zone. One pass later and DeSoto Central scored again with a touchdown reception by Ethan Minor to make it 31-15 with 8:20 left in the game.

Any hope the Mustangs still had disappeared when they fumbled the ball and the Jaguars recovered it with less than three minutes on the clock. They were able to stop the Jaguars and force a punt, but Center Hill turned the ball back over with an interception to sophomore Kailan Rashid with 1:21 left to play.

“We can’t give teams stuff,” Peacock said. “We have to control the football and execute offensively and defensively to not give them easy things.”

DeSoto Central ran the clock down to zero to close the game, 31-15.